Officially, after Cambridge English Language Assessment (then known as UCLES), The British Council, and International Development Program of Australian Universities and Colleges (IDP) redesigned the test, the number of test takers has been steadily rising, about 15% each year. From its early days, IELTS has been Paper-based test.  However, in 2017, the first computer-based test was launched in Australia and today it is now being officially administered in more than 100 countries.

So, what is the difference of the modes of the IELTS test? There is not much difference of the 2 options. The content, timing, and weight are all equal. Secondly, both assess the Speaking test face-to-face. This is because face-to-face is still the best way to gauge a candidates’ speaking skill.

For a quick look on the differences and similarities of the 2 kinds of IELTS test deliveries, please refer to the table below: 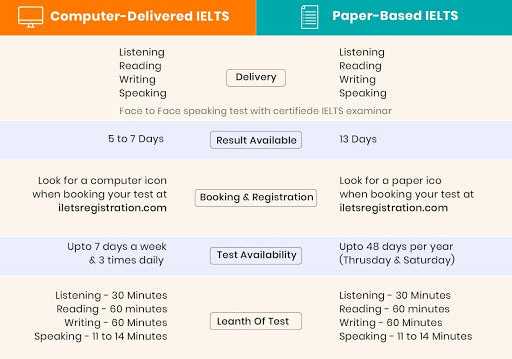 How Long Does It Takes To Get 6.5 IELTSHow IELTS Writing Task 1 Is Scored?